The first of three testing sites opened at the Lynn Haven Sports Park on Thursday, July 30 at 10 a.m. The second opened Monday, August 3 at 7 a.m. at Frank Brown Park in Panama City Beach. The third site will be in Callaway. Those details are still being finalized.

The three testing sites were by appointment only but are now excepting walk ups. They suggest for a low wait time and no appointment you should go in the early afternoon.  Each site will test up to 500 people per day for the Coronavirus COVID-19. Results are expected to be returned in 48 hours or less by an online portal or by phone.

As of now, officials say only adults 18 and over can be tested. They say they are working to offer the testing to minors as soon as possible. The hours of operation for each testing site will be: Monday, Wednesday and Friday from 7 a.m. to 3 p.m. and Tuesday and Thursday from 10 a.m. to 6 p.m. 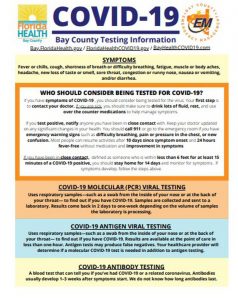 Early Voting for the Primary Election 2020. Dates, times and locations for any Jackson County Registered Voter.
Monday- Saturday, August 3rd thru August 15th, 8am- 5pm and Sunday, August 9th, 9am- 5pm. Any registered voter can vote at any one of the following locations during the early voting dates above.
*Sneads City Hall, 2028 Third Ave, Sneads
*Supervisor of Elections Office, 2851 Jefferson St, Marianna
*Graceville City Hall, 5348 Cliff St, Graceville
Primary Election Day is Tuesday, August 18th and voters will have to go to their assigned polling place.
If you already registered to vote by mail you should have already received your ballot. To ensure your vote is counted, supervisors recommend mailing ballots at least five days before election day or returning it in person.For the General Election which will be November 3,2020, the deadline for new registrations and party changes is October 5, 2020
Any questions or for more details click: https://www.jacksoncountysoe.org/ 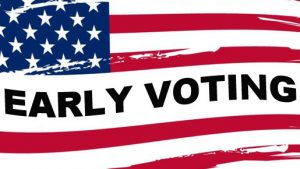 Now is the time to stock up or restock those school and office supplies. This weekend, August 7th, 8th, and 9th Florida will be having it’s annual sales tax holiday. Florida first held a sales tax holiday for school supplies in 2007.

During this sales tax holiday period, Florida law directs that no sales tax or local option tax (also known as discretionary sales surtax) will be collected on:
• purchases of clothing, footwear, and certain accessories selling for $60 or less per item,
• purchases of certain school supplies selling for $15 or less per item, and
• the first $1,000 of the sales price of personal computers and certain computer-related accessories, when purchased for noncommercial home or personal use.

The Jackson County Public Library in Marianna and Graceville are re-opening their doors today, August 3, 2020. Marianna will open at 9:00 a.m. with Graceville opening their doors at 10:00 a.m. They will both close daily at 5:00 to allow staff to thoroughly sanitize the facilities.
They have arranged the computers and furniture to allow for safe distancing in accordance with CDC guidelines. They are strongly recommending and encouraging masks and they will be available at the library as will hand sanitizer. The children’s room is not open for children to visit, it is recommended for their safety that children stay close to their parents while visiting the library.
At the present time, internet service is unavailable, but repairs are underway and we are very hopeful that service will be restored sometime next week. *Checkout is limited to five items per valid card. DVDs are limited to 5 per family. Launchpad checkout is limited to one per card.
Curbside service is still available at both locations for those who need it. You must fill a form out online 24 hours in advance. The link for the library is http://jcplfl.org/?fbclid=IwAR1_SzYMBiJ-xgr-S191pIMvNV8z2b11jROx_1a_H4UEok6VyBKOCSgeypk 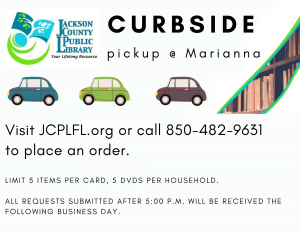 The Florida Department of Health is urging all Floridians to answer calls from (833) 917-2880 as this is part of Florida’s comprehensive contact tracing effort. If you receive a call from this number they are saying it is important that you speak to a contact tracer regarding potential COVID-19 exposure.

The newest catch phrase seems to be remember the 3 C’s. Avoid close spaces, crowded-spaces, and close-contact situations. And as always wash hands for at least 20 seconds with soap and warm water, cough into your elbow, and don’t go into public if possible while you are sick. 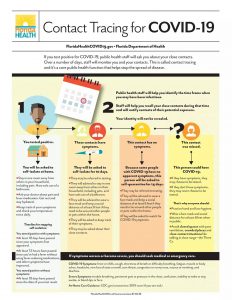 August is known for many things, including the dog days of summer, National Watermelon Day (Aug. 3) and National Smile Week (Aug. 5-11). But there are many other fun facts associated with summer’s last full month. The month of August is often referred to as the “dog days of summer” but not because of pet pooches. It has to do with the star Sirius, also known as the dog star, which rose at the same time as sunrise during the month of August in ancient Roman times.

~August is named after Augustus Caesar, founder and the first emperor of the Roman Empire, who was posthumously adopted by his maternal great-uncle Gaius Julius Caesar. In the early Roman calendar, August was actually the sixth month of the year. It was originally 30 days in length, but an extra day was added so that it would equal the number of days in July, which was named after Julius Caesar.

~August has two birthstones: peridot and sardonyx. Peridot is among the oldest known gemstones and is green in color. Sardonyx, which is lesser-known, is a white- and brown-banded gemstone once believed to have mystical powers.

~The official flower for August is the gladiolus. These vertical-growing flowers were named from the Latin “gladius,” meaning a sword.

~People born in August fall under the sun zodiac signs of Leo and Virgo. Leos are known to be dramatic, creative and outgoing. Virgos have acute attention to detail and are the people most likely to dedicate themselves to serving. They also are loyal, hardworking and analytical.

~On Aug. 21, 1911, the Mona Lisa was stolen from the Louvre Gallery and not recovered for two years.

~Although civil rights activist Martin Luther King, Jr., is honored in January, when he was born, he is best known for his famed “I have a dream” speech, which was given on Aug. 28, 1963.

Happy last month of the summer~ 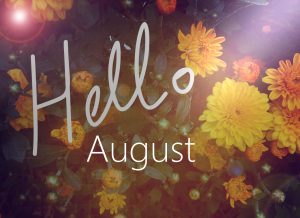 The Springfield School Museum is located on Union Road just west of Marianna, not far from Jackson County’s first county seat of Webbville in the community known as Springfield. While the museum is not open on a regular basis, tours can be arranged through Lillie Clark, who owns LMC Impressions and The Gallery of Art just north of the schoolhouse on Safari Road. She can be reached at 850-263-3111.
Lillie Clark, Mary Beechim, and Elease Varner are all residents of Springfield that have worked diligently to receive funding for restoration of the schoolhouse through grant opportunities made available by the Bureau of Historic Preservation Division of Historical Resources and with assistance provided by the Florida Historical Commission. Many of the original interior furnishings of the school were carefully preserved over time and are used in the present day museum, such as the desks and pews. The original floors and walls were also very carefully preserved, something Lillie Clark doted on in a 2019 interview with Jackson County Times, referring to the schoolhouse being left in “mint condition”. As with any historic structure, original pieces that have been preserved are considered highly valuable, but it is even more so in the case of the limestone walls of the 1920s schoolhouse, constructed out of local limestone blocks. Waddell’s Mill Pond, which is visible from the rear of the schoolhouse, was the source for some of these limestone blocks which Mary Beechim’s brother helped bring up to the school. Mary and her siblings also attended the school during their childhood, allowing for the preservation of memories and experiences of days gone by.

Today is an international day of recognition for human trafficking crimes. The World Day against Trafficking in Persons is dedicated to bringing awareness to the horrific crime that is human abduction and trafficking. This is a global crime that targets and exploits women, men, and children for horrible purposes such as forced labor and sexual molestation. People may feel that this is the type of thing that only happens in specific areas or on TV crime shows or as a bad plot for action movies starring Liam Neeson – but the reality is much sadder and so horrific.

The Panhandle is not immune to human trafficking. In fact, just last November a Pensacola business owner named David C. Williams pleaded guilty to trafficking women to provide prostitution services out of his massage parlors (amongst other charges like money laundering). Additionally, the state of Florida is ranked SECOND in the country for highest number of human trafficking reports received by the National Human Trafficking Hotline.
If you are interested in learning more about how you can bring awareness on how to spot human trafficking, report it, and fight it in your life and community, please check out the local organization Called2Rescue located in Pensacola. This non-profit organization as founded by Brad Dennis in 2013 and was created to “educate, empower and mobilize an alliance of local churches and community partners to search for and rescue trafficked and exploited persons in our area.” Additionally, the Florida Coalition Against Human Trafficking is an excellent source of information and resources. 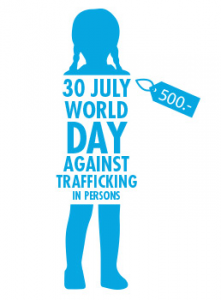 Thursday from 6 PM – 9 PM at Citizens Lodge Park  Main Street Marianna, City of Marianna City Hall and 3 others are hosting an End of Summer Concert in the park. The band Heyword will be playing from 7-9 pm. Papa G’s and The Ice Box will be there vending starting at 6 pm. Social distancing will be in practice as you join them to bring an end to the summer.

The Gathering is hosting a night of hope. Friday, July 31st at 6pm at Hope Park on 159 Bear Creek Road in Eastpoint. They will have free food, fellowship, worship, dance, and word. 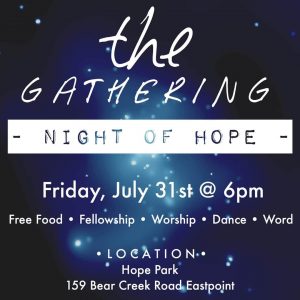