Skip to content
The Springfield School Museum is located on Union Road just west of Marianna, not far from Jackson County’s first county seat of Webbville in the community known as Springfield. While the museum is not open on a regular basis, tours can be arranged through Lillie Clark, who owns LMC Impressions and The Gallery of Art just north of the schoolhouse on Safari Road. She can be reached at 850-263-3111.
Lillie Clark, Mary Beechim, and Elease Varner are all residents of Springfield that have worked diligently to receive funding for restoration of the schoolhouse through grant opportunities made available by the Bureau of Historic Preservation Division of Historical Resources and with assistance provided by the Florida Historical Commission. Many of the original interior furnishings of the school were carefully preserved over time and are used in the present day museum, such as the desks and pews. The original floors and walls were also very carefully preserved, something Lillie Clark doted on in a 2019 interview with Jackson County Times, referring to the schoolhouse being left in “mint condition”. As with any historic structure, original pieces that have been preserved are considered highly valuable, but it is even more so in the case of the limestone walls of the 1920s schoolhouse, constructed out of local limestone blocks. Waddell’s Mill Pond, which is visible from the rear of the schoolhouse, was the source for some of these limestone blocks which Mary Beechim’s brother helped bring up to the school. Mary and her siblings also attended the school during their childhood, allowing for the preservation of memories and experiences of days gone by.

Mixson had adopted Jackson County as his home ground as a young adult, when he’d moved here from his native Alabama home and embraced the local community as his own. He married a local girl with deep roots in Jackson County’s history. His bride was Margie Grace. The town of Graceville was named for her forebears. The two met when she was 14 and he was 19. He had graduated high school by then and was off to the Navy soon after. They kept up a courtship by correspondence for the endurance of his military term, which included service in World War II. They married in 1947, the year he graduated from the University of Florida with a degree in business. They moved to Campbellton, where they bought a small farm and eventually expanded it to some 2,000 acres focused on peanuts, grain and cattle.

His success in the political world began in 1967, when he was first elected to the Florida House of Representatives. Mixson had served a decade in the House when, in his sixth consecutive term there, gubernatorial candidate Bob Graham selected him as his running mate. The two would win that bid for office, and served together in their respective roles from Jan.1979 to Jan.1987. Mixson also served as Graham’s Secretary of Commerce. Mixson had also served a role in politics for President Jimmy Carter, appointed by him as a special ambassador to Ecuador in 1979.

And for three days that last year with Graham, Lt. Gov. Mixson stood in as governor when Graham necessarily stepped from that high office to be sworn in as a newly elected U.S. Senator. That three-day term of service as the transitional figure ahead of Bob Martinez taking office would assure him a place in the annals of history as the governor with the shortest term on record. And, 27 years later, it would also be further cemented in the formal renaming of a local road. In 2014, the Florida Senate designated State Road 73 north as Governor Mixson Highway. It stretches from Calhoun County and extends through Jackson County to U.S. 231 near the Florida-Alabama line. It’s known as Jefferson Street in Marianna, CR 167 in the unincorporated areas of Jackson County, and Florida calls it State Road 73.

The gesture was meant to recognize Mixson’s career-long advocacy of the farm community by naming a designated farm-to-market artery in his honor. Once he moved to Florida, Mixson put his hand and mind to work for his adopted state and he has often been referred to as Florida’s “favorite son.”

“I had no idea it was being proposed until it happened. It was a real thrill. They picked the right road, if they were going to name one after me. I think the system of farm-to-market roads is so important. I reckon that to be equivalent to the advance of electricity because these are the roads that connect producers to the markets in town.”
Mixson was here for that 2014 road-naming ceremony, and spoke briefly, saying he was honored by it. “They must have known all about me and where I lived,” Mixson said at the time in an interview with the Floridan. “I took that road many many times, going to the farm, going fishing, and going to the beach. If I left the house, I was going to be on that road pretty soon. I appreciated the thought,” he said of the plan to name the road after him. “It just fit so well,” he said in 2014. “If they were going to name anything for me, it ought to have something to do with bringing agriculture out of the dark ages. I’m old enough to have plowed mules in Coffee County (Alabama), but I joined the mechanized age as soon as I could.”

Mixson also said at that time that he was the only “true dirt farmer” in the legislature during his six-year term. His roots in agriculture and his childhood years in the pre-WWII Depression would inform and serve him well during those years. 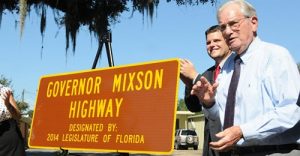 The son of Janet and Waymon Moneyham, John Perry Moneyham is a 1980 graduate of Marianna High School. He was appointed in early July by Gov. Ron DeSantis. Moneyham has been a board-certified workers’ compensation specialist since 1995, and has been president of his own law firm, John P. Moneyham, PA, since 1991. Before opening his own practice, Moneyham served as an associate for McConnaughhay, Roland, Maida, Cherr and McCranie. He received his bachelor’s degree from the University of Florida and his law degree from Florida State University.

To become a judge, he had to pull in his shingle as a private attorney, but Moneyham said he’s looking forward to being a judge in an area of the law he’s found exciting and challenging in his practice. Moneyham submitted his name for consideration and was first interviewed by Florida’s Judicial Nominating Commission. From there, the governor’s general council interviewed the finalists and selected three for DeSantis to consider. The governor had the final word.

Once he learned of his appointment and celebrated it with wife Julie and their two children, Moneyham made a bee-line for his childhood home.

Back in March, the Republican Party sent out over 5,000 flyers and they saw a late increase in registered Republican voters.

Jackson County has a big local election season coming up as well. The Sheriff, Supervisor of Elections, Superintendent and two County Commissioner seats will be up for election and Pate believes the shift from blue to red in the county could affect the results.

For more information on how to get registered to vote or on Jackson County local elections, visit the Supervisor of Election’s https://www.jacksoncountysoe.org/. They have already started sending out vote by mail ballots.

Florida’s state capital is housed in Tallahassee but how much do you know about it? The Florida Capital Complex website says the building “provides a dignified and serviceable headquarters for state government.” The Capital as currently viewed was finished in 1977 after five years of work overseen by Edward Durell Stone of New York and the firm of Reynolds, Smith and Hills of Jacksonville. Durell created the twenty-two story building to “reflect a modern Florida.”

The Florida State Capitol in Tallahassee, Florida, is an architecturally and historically significant building listed on the National Register of Historic Places. The Capitol is at the intersection of Apalachee Parkway and South Monroe Street in downtown Tallahassee, Florida.Sometimes called “The Old Capitol,” the Historic Capitol, built in 1845, was threatened with demolition in the late 1970s when the new capitol building was built.[3] Having been restored to its 1902-version in 1982, the Historic Capitol is directly behind the new Capitol building. Its restored space includes the Governor’s Suite, Supreme Court, House of Representatives and Senate chambers, rotunda, and halls. Its adapted space contains a museum exhibiting the state’s political history, the Florida Historic Capitol Museum, which is managed by the Florida Legislature. On April 18, 2012, the AIA’s Florida Chapter placed the Historic Capitol Building (Restoration) on its list of Florida Architecture: 100 Years. 100 Places. 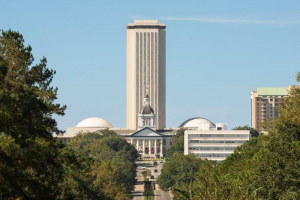 Lighthouses are a quintessential Florida sight. There are five beautiful, historically rich lighthouses you can visit in the Panhandle. Cape San Blas Light is located in Port St. Joe and was first erected in 1849; it can be seen 10 miles off shore! Cape St. George Lighthouse, located in St. George Island, was built in 1852 but collapsed due to erosion in 2005. Luckily, the community rallied together and the lighthouse was restored. Crooked River Lighthouse, built in 1895, is located in Carabelle. The lighthouse didn’t even have electricity until 1933! Pensacola Lighthouse – located in Pensacola – was built 1824. Crazy fact? It was hit by lightning twice! Once in 1874 and then again in 1875. The St. Marks Lighthouse was officially finished in 1831, and is currently part of St. Marks Wildlife Refuge. It’s the second oldest lighthouse in Florida. Visit each lighthouse to learn more!

Half of Florida’s dry counties are found in the Panhandle. There are a total of four dry counties, areas where the sale of alcohol is prohibited, in Florida. The two counties in the Panhandle are Washington and Liberty. Liberty County was created in 1855 and named after the American ideal of liberty; sadly, there are no Florida counties named freedom or equality to complete the ideal set. Washington, named after the first president of the USA, is only a partially dry county. For this specific county, partially dry means that alcohol cannot be bought or sold on Sunday within the city limits of Chipley. Vernon, Ebro, and Wausau are excluded from this ordinance. 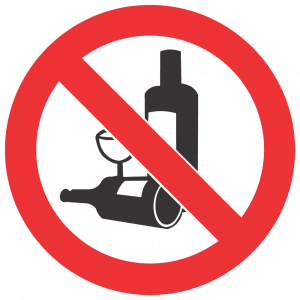 Did you know that the Florida Panhandle is technically three separate regions? There’s the Emerald Coast, the Forgotten Coast, and the Interior Panhandle. The Emerald Coast is also called the Miracle Strip and includes Escambia, Santa Rosa, Okaloosa, Walton, and Bay counties. Formerly known as the “Redneck Riviera,” it includes such sites as the Choctawhatchee National Forest and the Gulf Islands National Seashore. The Forgotten Coast is called so because it includes a series of coastal counties that had been left out of Florida tourism promotions for several years in a row. The counties? Franklin, Gulf, Jefferson, and Wakulla. Some beautiful things to see are the Apalachicola National Forest and Bald Point State Park. The Interior Panhandle includes those counties not bordering either coast. 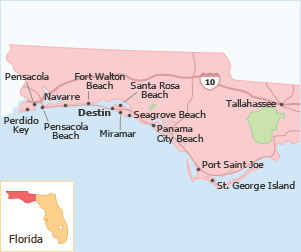 Friday, March 6, 2020 was the 155th anniversary of the Battle of Natural Bridge, fought just south of Tallahassee near present-day Woodville in the final months of the American Civil War. Joshua Hoyet Frier was a Confederate soldier from Florida who wrote down his recollections about the war. The memoir was later transcribed by one of Frier’s descendants, and a copy of it now resides at the State Archives of Florida.

Spring is upon us, and the bird calls have only just begun. Did you know that Florida’s state bird is the mockingbird? Mockingbirds were chosen as the official state bird in 1927, the same year Texas declared mockingbirds their official bird too! Arkansas, Tennessee, and Mississippi also chose the mockingbird as their state bird, although later than Florida. Mockingbirds are arboreal songbirds; arboreal simply refers to a bird that nests on tree branches and seldom comes to the ground for foraging purposes. Mockingbirds have extraordinary vocal abilities – they can sing up to 200 songs, including the songs of other birds and can also mimic (or mock) insect, amphibian, and mechanical sounds. 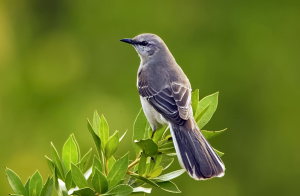